Archiving the Inner City: Race & the Politics of Urban Memory

Archiving the Inner City is a five-year University of York research project led by Dr Gareth Millington and funded by the Leverhulme Trust.

About the Archiving the Inner City project

How the urban past is curated is always a contentious process. This is especially true in the case of already politicised spaces such as the ‘inner city’, where urban decline was presented by politicians and the media (and some sociologists) as a ‘race problem’.

The project examines how, by whom and for what purposes the twentieth century ‘inner city’ is remembered, curated and represented. The project is international in scope and focuses on sites in London (Brixton), Paris (La Goutte d’Or / Château Rouge) and Philadelphia (the historic ‘Seventh Ward’, the location for W.E.B. Du Bois’ famous study The Philadelphia Negro). In each case, the resonance and influence of place—as historic centres of black urban life—transcends locality and extends beyond the city.

This project will not produce an archive itself, nor will it seek to narrate urban history. Rather it seeks to understand the contested ways that the times and spaces of the ‘inner city’ are made legible today in cities that are, at the same time, being shaped by political economic processes of gentrification, heritagisation and tourism. The project is led by Gareth Millington and the researchers are Miranda Armstrong, Aurélien Mokoko-Gampiot, Ayshka Sené, Irteza Mohyuddin, Sophie Rainbow and Austin Cooper.

Brixton was an important settlement for migrants from the Caribbean in the decades following the arrival of the Empire Windrush at Tilbury in 1948. During this period, Brixton gained a reputation as the spiritual home of Caribbean settlement in the United Kingdom. In the 1980s, Brixton was one of many British inner cities that experienced uprisings, often sparked by police brutality, that were the result of high youth unemployment and discrimination in many areas of life such as education, employment and housing. 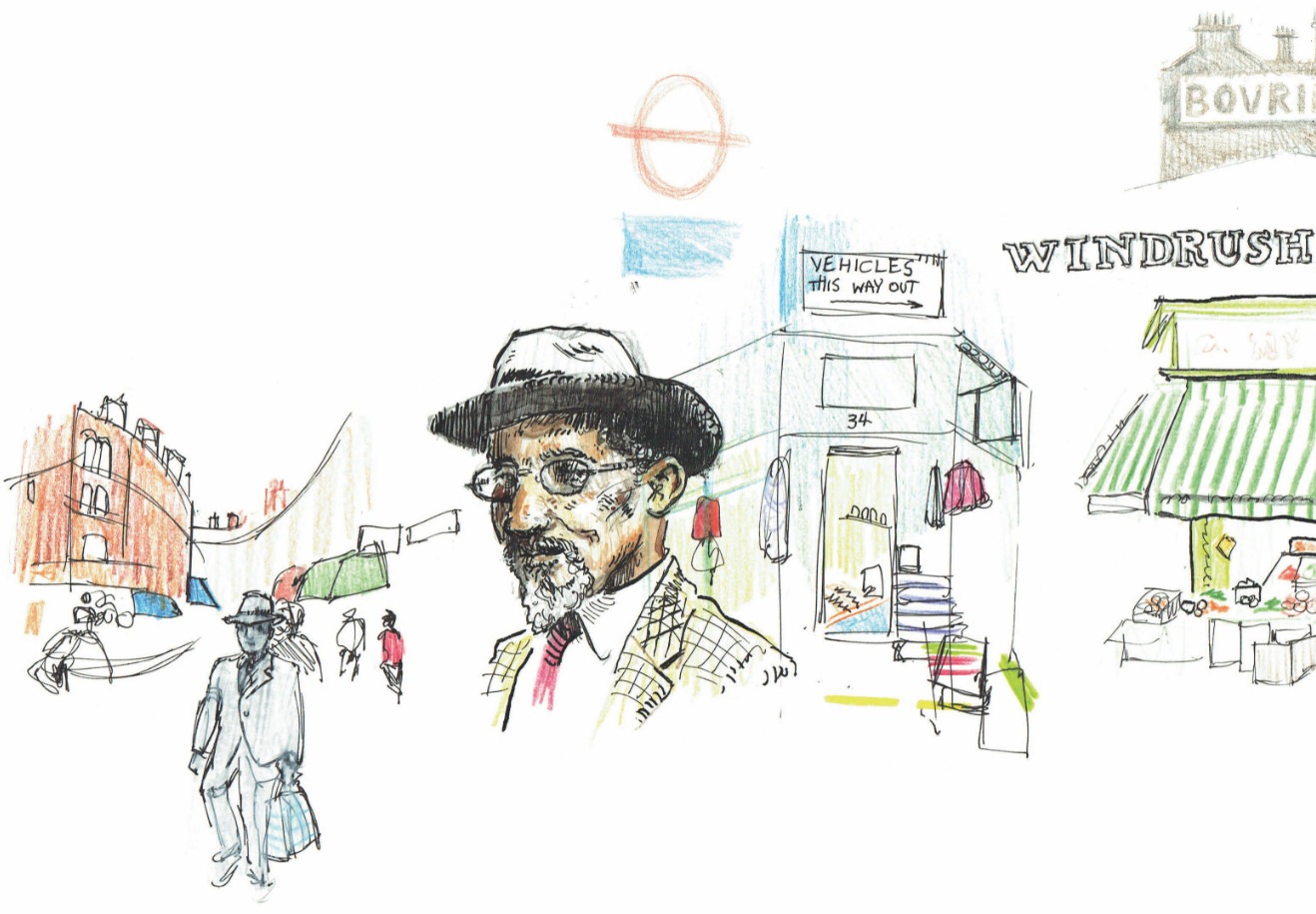 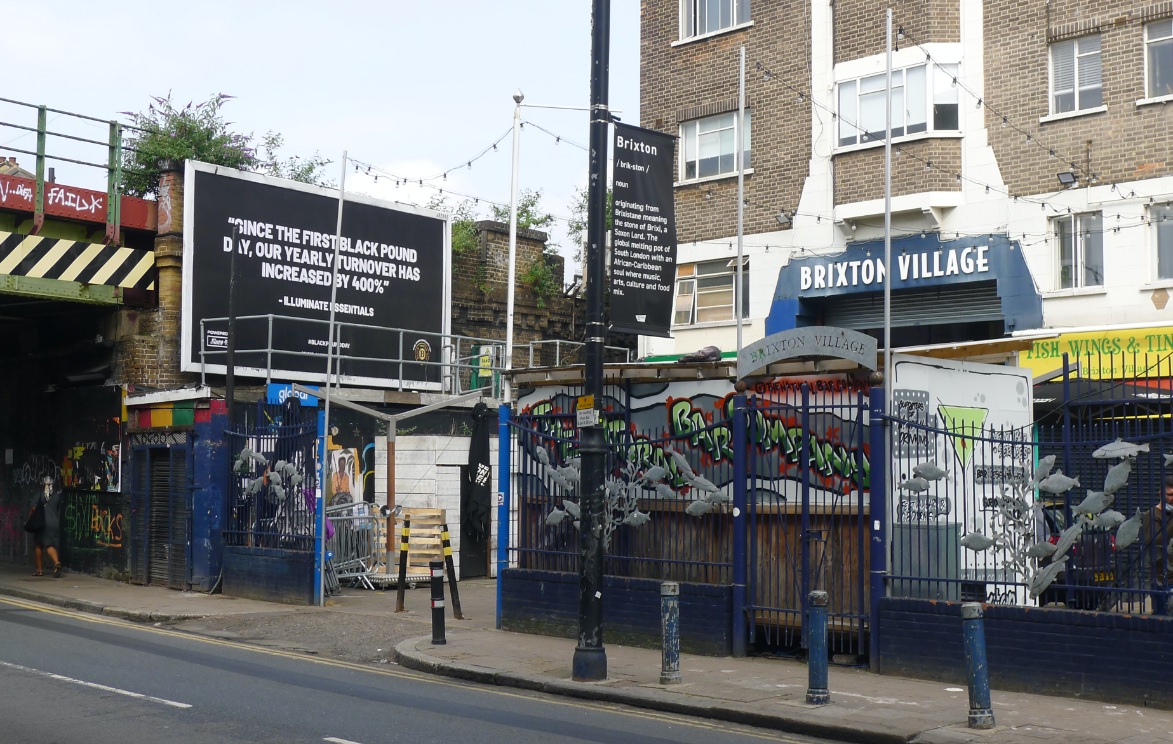 As Paul Gilroy argues, Black Britain is a ‘compound culture’ merging Caribbean and British identities with a political sensibility and expressiveness transmitted from black America. Brixton became an urban hub where different strands of this culture could be articulated and, as such, it attracted a community of artists, musicians and designers as well as political activists.

Brixton continues to be promoted as an urban cosmopolitan lifestyle centre based upon a public persona of desirable diversity. While gentrification is widely recognised as threatening the distinct character of Brixton, after many years of campaigning, the Black Cultural Archives (BCA) founded in Brixton in 1981 finally found a permanent home in the regenerated Windrush Square development. 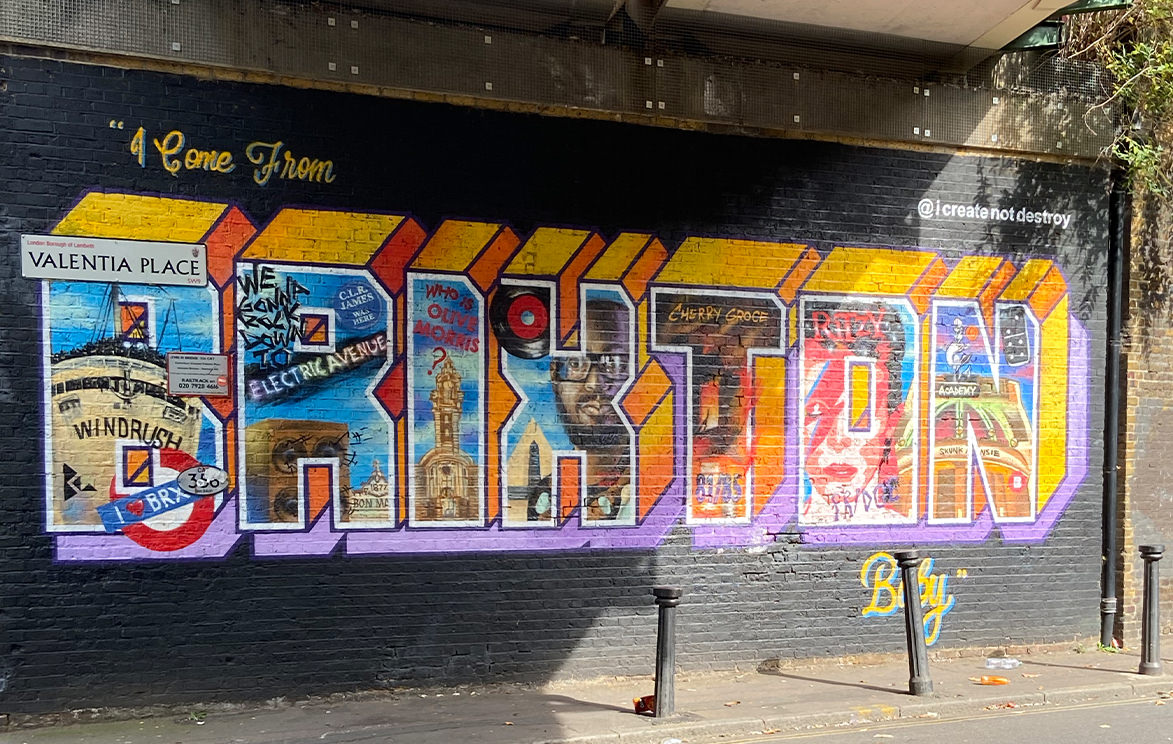 It is the banlieues or suburbs of French cities that are usually associated with migration, discrimination and resistance, but central locales such as La Goutte d’Or and Château Rouge—known as quartiers populaires (a French term that echoes that of the inner city)—are also important, if less studied sites. For example, in 1996—in what became an international news story—the Church of Saint-Bernard in Goutte d’Or provided refuge to 200 sans-papier migrants from Mali; who, after two months, were forcibly removed by police and deported from France. 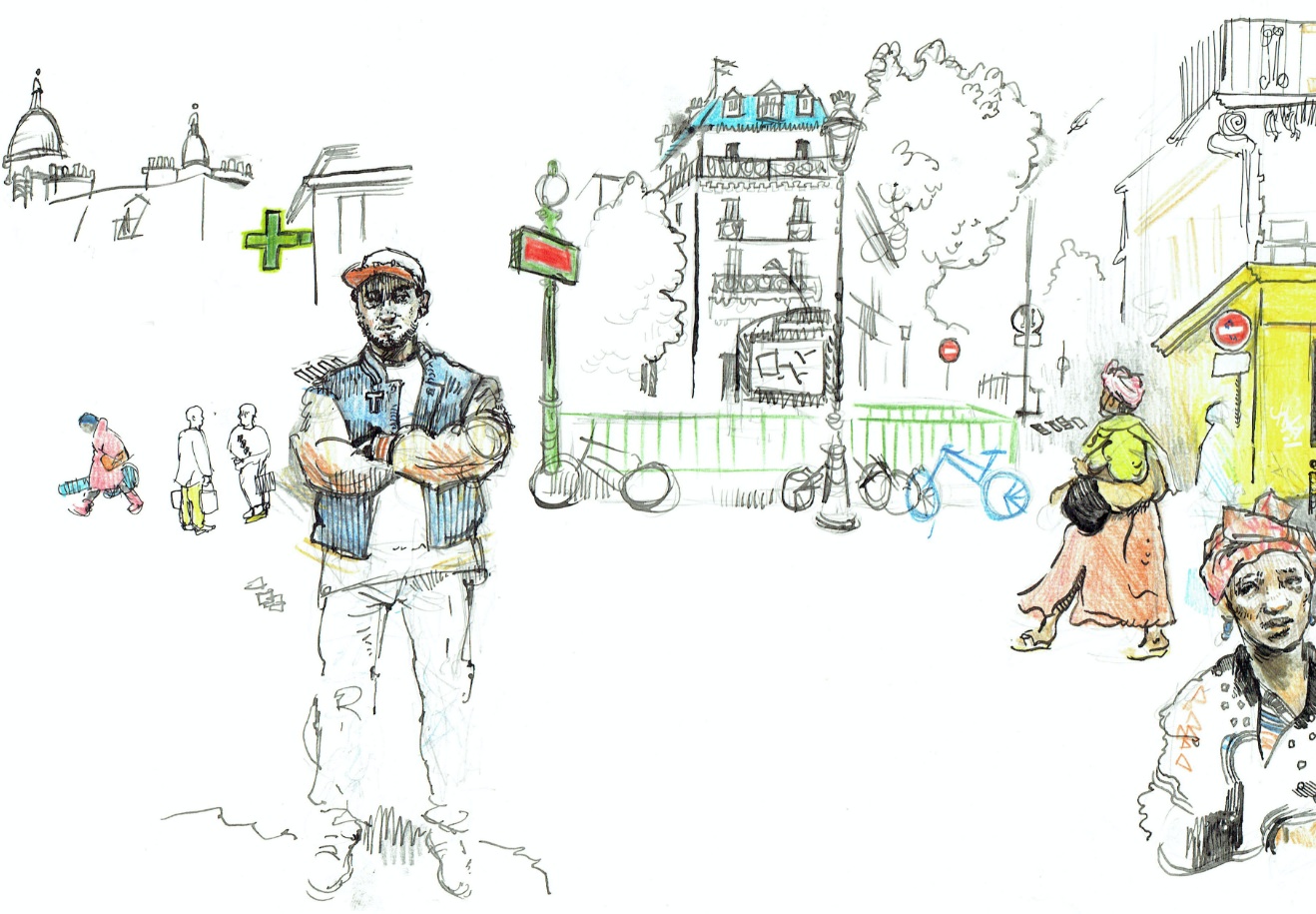 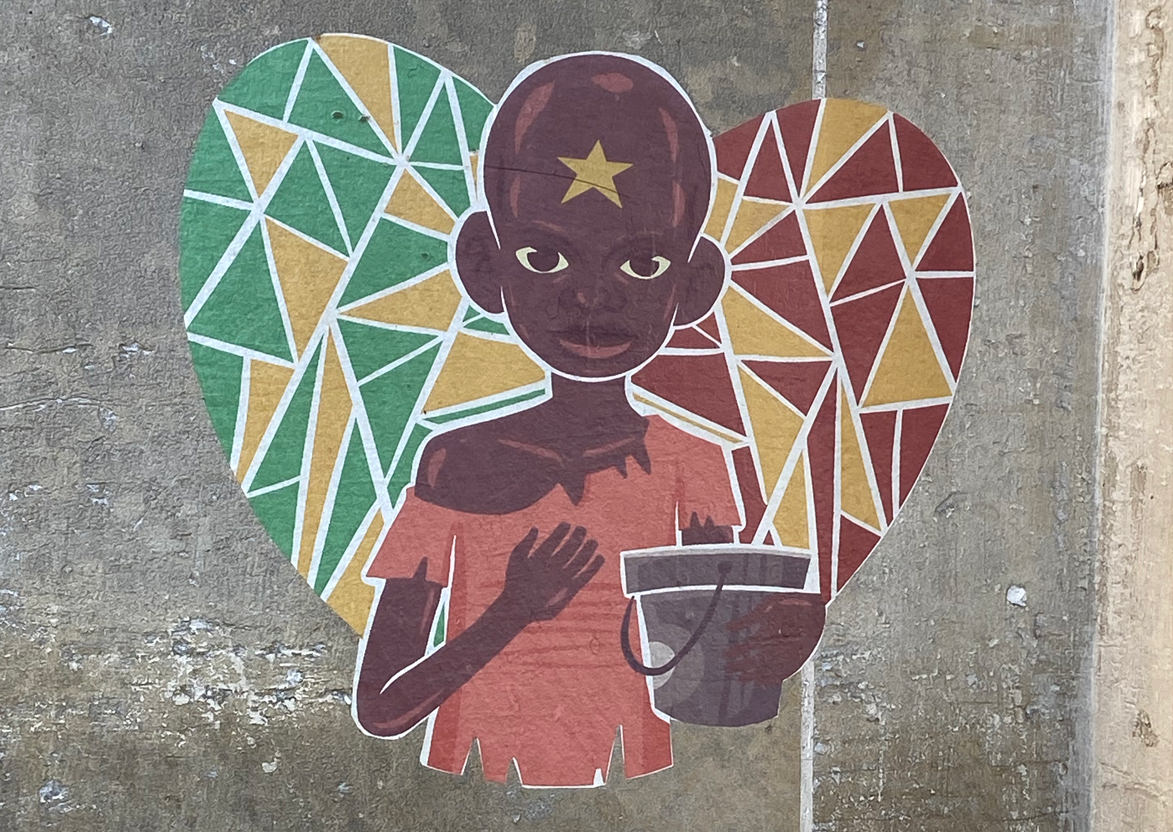 The history of this part of central Paris reveals how African Americans settled in Montmartre in the 18th arrondissement of Paris during the 1920s. During World War I, the French government employed over half a million immigrant workers for its industries, mainly from French colonies in North Africa. Many, along with their families, settled in the adjacent La Goutte d’Or and Chateau Rouge neighbourhoods. Successive waves of immigrants from sub-Saharan Africa have since settled in the area, now sometimes known as ‘Little Africa’. The market on rue Dejean and the surrounding streets are now a busy commercial hub frequented by many West African and Congolese Parisians.

The Goutte d’Or and Château Rouge areas of the 18the are now experiencing some gentrification. In 2003, then Interior Minister Nicolas Sarkozy sought to ‘cleanse’ the district of its African character. Indeed, as Éric Hazan has explained in The Invention of Paris, the slow incursion of ‘bobos’ (bohemian bourgeois intellectuals such as journalists, designers etc.) started during this period but, he also reports, the Congolese and Senegalese are ‘holding their own, and even gaining ground here and there’. The heritage ‘industry’ in the area is embryonic, with Chateau Rouge/ Goutte d’Or beginning to appear on itineraries in tourist guide books and as the focus for specialist Black History walking tours. 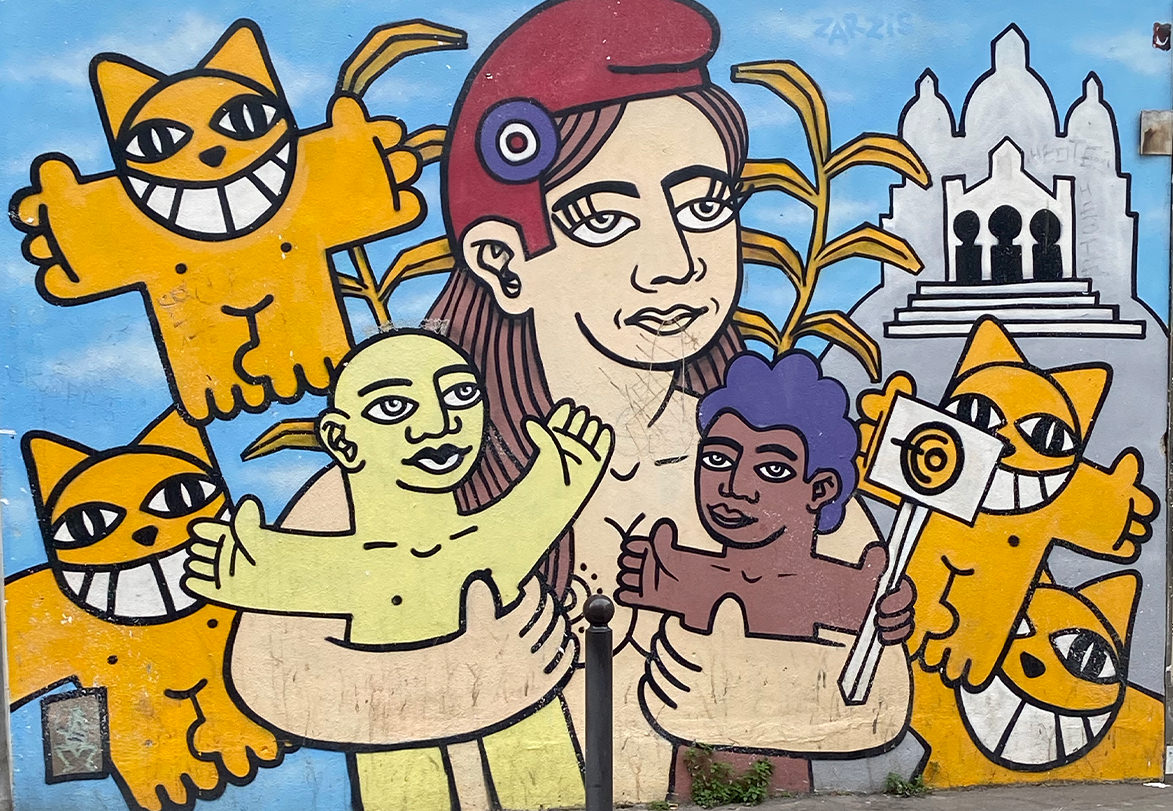 In 1899 W.E.B. Du Bois published The Philadelphia Negro, a landmark sociological text based upon a survey of African Americans living in the Seventh Ward, an area located just to the south of central Philadelphia. Critical labour shortages during and after WWI drew thousands more black people from the South to the city’s Seventh Ward. A second, far larger Great Migration occurred after World War II, almost tripling the African American population of the city by 1970. 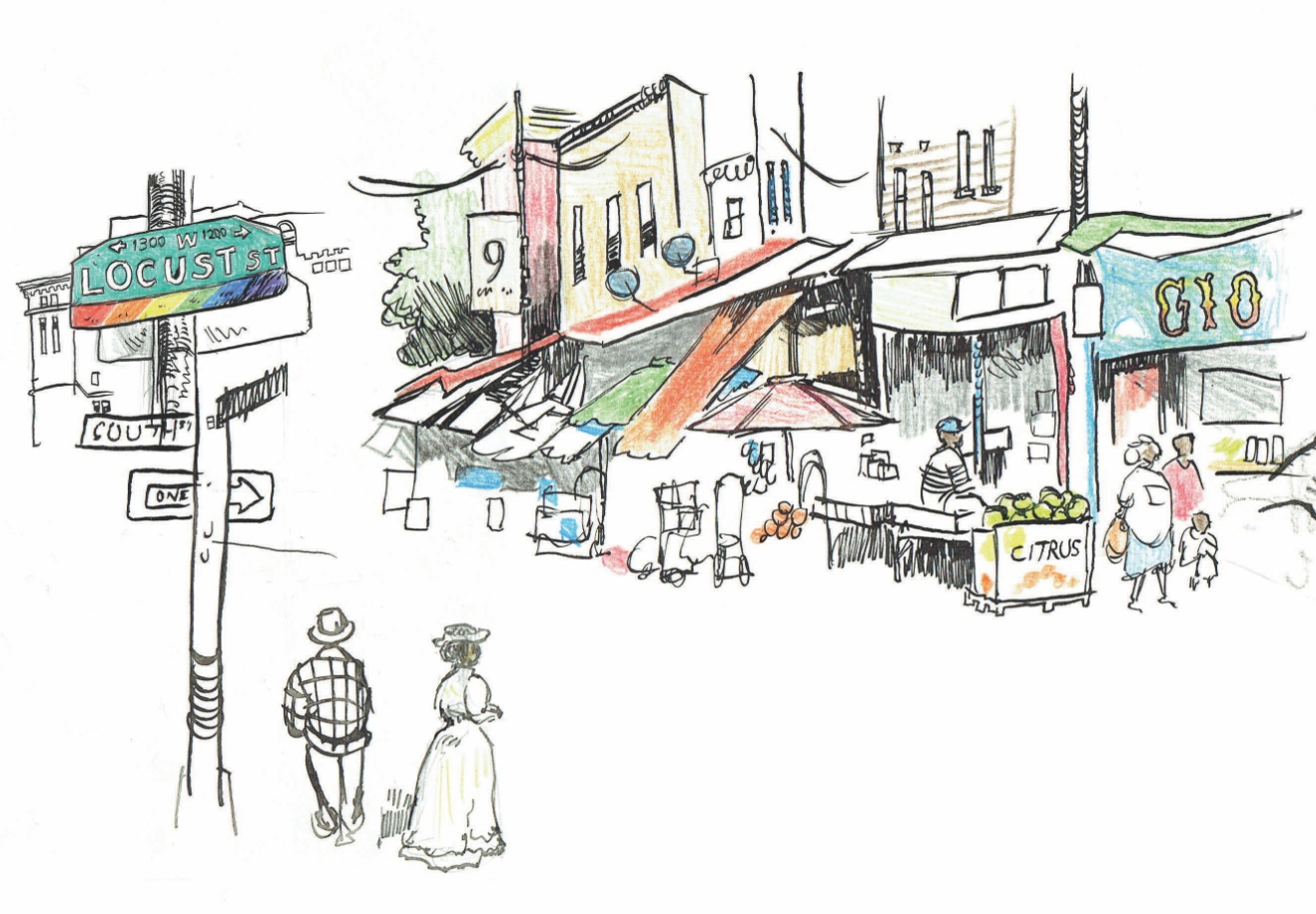 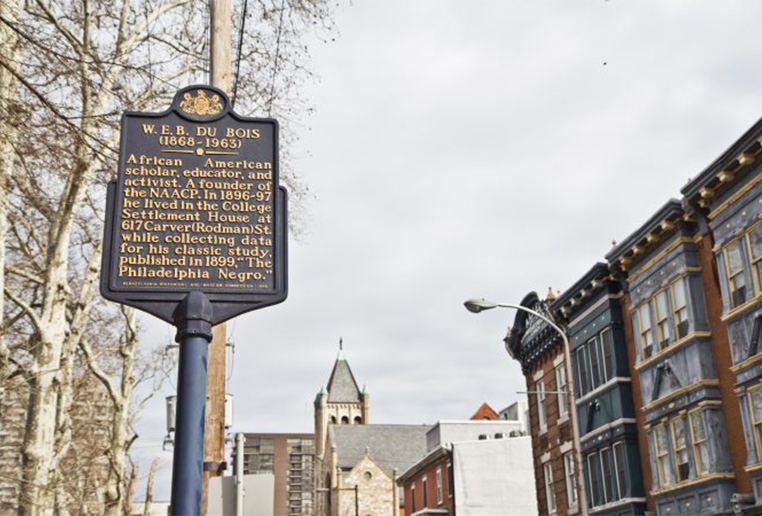 The Seventh Ward became one of many black neighbourhoods in Philadelphia, but maintained its reputation as the heart of black life in the city. Du Bois’ survey of living conditions in the Seventh Ward brought attention to the ignominies suffered by black residents, while the 1964 Philadelphia ‘race riots’ (an echo of those which occurred in 1842) revealed how strained race relations in the city had become by the civil rights era. In 1976, Philadelphia was first city in the US to inaugurate a museum of African American history and culture. The museum is situated centrally, close to what was once the Seventh Ward.

However, as Marcus Hunter explains in Black Citymakers, today the Seventh Ward is no longer referred to locally or administratively by this name. In fact, ‘[m]ost of the black churches, stores, and social clubs […] are all gone’ (ibid). Gentrification of the area combines an artsy aesthetic with luxury upscaling such as new condominiums. However, physical preservation of historic buildings and new street murals does, at least to some extent, preserve and remind visitors and new residents of the district’s black legacy.