Yvonne Taylor: ‘With Sistermatic, people were grateful for something fresh’

During the mid-1980s Yvonne Taylor, 63, co-founded the black lesbian-run sound system, Sistermatic, who worked as a women’s collective of promoters. Sistermatic ran a night at the legendary South London Women’s Centre for several years, and played at local women’s centres across the city up until the early 1990s. Taylor continues to run events, including Queer Ball, a 1950s and 1960s night and Sunday Happy Day, a soulful house event that has been going for 17 years. She shared her thoughts on the socio-political importance of sound systems, the disappearance of women’s centres and her experiences of 1980s Brixton. 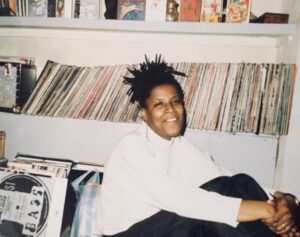 Please tell us about Sistermatic: what was the impetus behind its creation?

When I came to London in 1983, ‘84 I was trying to find some place to go out but couldn’t, it was not my kind of music, very white-centric. Around the same time there was a large influx of black women from the north and the Midlands, looking for somewhere they could feel less isolated. At a dinner party in Kennington with three other women of colour, an idea was developed for a party that was a bit more interesting, a bit more representative. I found myself as one of the main DJs as well as an organiser of this soon-to-be monthly women’s dance. We played everything from Janis Joplin to Dennis Brown and all in between, especially strong empowering women performers – Aretha Franklin was massive. Disco was my big thing. We were the go-to party.

Sistermatic played at the South London Women’s Centre. Can you please say a bit about the community there?

It was empowering. It afforded lots of black Caribbean women the ability to meet and realise that we weren’t on our own. For a lot of black women at that time it was difficult if you were queer and a lot of people were still under cover because it was a lot easier. Sistermatic was at the South London Women’s Centre for maybe five or six years. The centre had such an array of people attending: people from different class groups and with varying degrees of education; some were not political and came out to party, and some came out because it was a room full of women. We had black women, Asian women, women from all over the world. We had white women that came from different groups: feminists, academics, rebel dykes, punks, Greenham Common people, they were all collected in this hall that probably held about 200 women. We cooked food, we had a games room upstairs for women who wanted to play pool. It was a game change because it was the first sort of club in London where it wasn’t based on racial identity. It brought a group of women together that wouldn’t have normally associated. It became quite popular very quickly. When I talk to women about it now, they say ‘you don’t understand how much that saved our lives’. 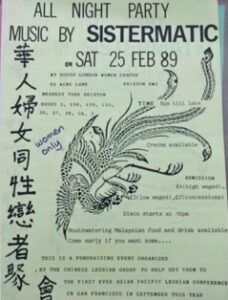 Black people weren’t going to the working men’s club with the Union Jack and the picture of the queen up. Without sound systems I don’t know how we would have survived because it was a connection to something back home. For me, it kind of brought a level of consciousness, I was listening to people like Burning Spear. The baseline in those speakers just took you over and took you to a place that you felt safe. Here we are trying to get a British identity that’s just never been afforded us. I don’t really know how our mental health would have been without it.

Do you have your own collections from that period?

I was an avid record collector from the age of 11 – that’s what I spent my pocket money on. Records were my therapy. When I think about reggae artists like Culture and U-Roy, their lyrics were just what we needed to hear as a first-generation British-born black. You felt understood. I had thousands of records I stupidly got rid of. Probably the only mistake I’ve ever made in my life was to get rid of my records. 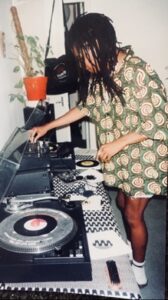 What was London, and more specifically Brixton like during this time for black women?

In the 1980s, black women were collectively finding their feet, saying ‘right, we don’t have to put up with this, we’ve got rights’. In the Brixton area we were having to deal with not only general homophobia but also within our own communities as well. There was also a feminist perspective that was in full flow. Both right-wing feminism and left-wing feminism were jarring for a lot of women of colour, it was like, ‘I’m trying to fit my life into this very white social scene and now I’m kind of having to listen to this politics that I can’t really relate to’. We had to create room for a whole range of different women to have a proper conversation with each other. My perspective was very much tapped into the social scene but there are people out there that were much more into the political thing. Some of those people are still quietly doing their own thing, they based their whole lives around the fight. Black women and Asian women came out and were doing their thing behind the scenes of the riots in 1981. There were people in Brixton who campaigned for so much more than just the right to party. It was enlightening, I got an education.

There seems to be something about letting off steam and trying to have balance, that seems important too.

Yes. I spent my first few years in Brixton trying to navigate who I am in Brixton and how I’m perceived in Brixton, then it got to a point where I didn’t really care how I’m perceived: ‘I live here, I pay my taxes’. I could have spent all the years trying to fight off all these white people, trying to fight off black people making judgements. But in the end, it was like ‘grow up and get to the root of what the real problem is’. Really, it’s not each other.

Can you speak to the shift and decline of queer black events?

There has been a decline in accessibility to women’s spaces and a shift towards this idea of men-only clubs and women-only clubs, which diluted the whole scene. A lot of women around at the time had kids and didn’t want to get too involved in case their kids were taken away. In the 1970s police could just come round and take kids away. The assumed moral effect of homosexuality on children was an issue – so women had a lot more to lose.  A lot of people just thought ‘well there’s nowhere to go’. It’s not like, as a straight person you can decide to go for a drink, and you’ve got choices. It was a lot more difficult because you had to deal with racism as well. We’ve lost some of the goodness of having black women-only spaces too, they’re rare now. Age is also an issue, just because you’ve got to 40 or 50 doesn’t mean you want to stop going out. In the queer space now there are walking groups, football teams, groups that hang out but it’s not got any cohesiveness to it. 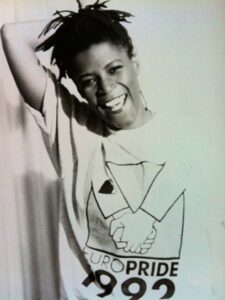 Do you think groups and centres that existed had funding because of the GLC?

The GLC went partly because it was far too liberal, any government of the day was mostly Tories. Once the GLC went, and funding was taken away from all those kinds of projects it kind of ripped the heart out of the community. Sistermatic used to play at all the women’s centres; Southall, Southwark women’s centre, Brixton and Hackney. We even had child care at some of these parties! Anybody that was black and a lesbian or a queer woman came to our nights. Taking away the funding from all these centres it was about keeping us apart and making sure we didn’t rise up.

How important is the disappearance of resources like the Black Lesbian and Gay Centre?

The Black Lesbian and Gay Centre which was based in Peckham offered an amazing service. When they went it affected people’s ability to interact. Places like that were politicising a lot of black queer women that were really struggling with their identity, it was like an escape for them, somewhere where they could get advice, meet other like-minded women and generally just have a space where they could feel safe. A loss was felt because there was nothing to replace it.

Has the internet replaced those centres, in terms of people meeting and getting support?

It certainly has improved the way the younger generation communicates. There are Meet Up groups and WhatsApp groups now that have started to address the lack of spaces to go.  For people in my age bracket, it’s slightly different. They’re feeling a bit more isolated because they’re not part of that system. 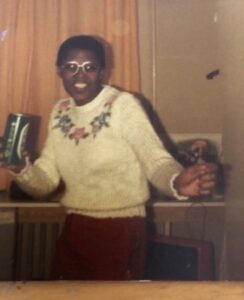 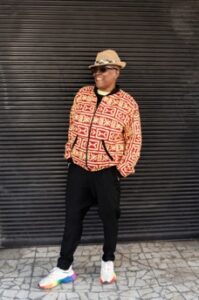 Why do you think the Black and Gay Back in the Day archive project is so significant?

I think it is majorly significant because we don’t have any history apparently, and we didn’t exist, which is so not true. I think that we should be encouraging more of those women to tell their stories, especially the mothers, about how it was living in Brixton. It’s extremely difficult because people don’t really want to be in photographs or on TV. I think the other women of my time don’t realise the significance of what we’re contributing to; the future POC queer community. Stories need to be shared so that our younger people have got some sense of how we’ve evolved to be a reckoning force within the LGBT community.

What is the cost of omissions in the dominant narrative of London’s history?

There’s a generation that has been in the background for so long, who are not being recognised. There’s all this history that’s just getting erased out of Brixton and it does concern me, not just as a queer person but just as a black person full stop. We were part of Brixton, we made our way in Brixton without the help of white people because we had to, where else were we going to go and live? Only bad stories, like the riots, are remembered but there were a lot of things that we contributed. This is the time to get these stories out.